President Obama travels this week to Kenya, where he and President Uhuru Kenyatta will discuss how to intensify our shared fight against terrorism and stabilize the region. As they debate these critical issues, they can learn a great deal from the ongoing efforts of Kenyan women to build a safer, more inclusive country.

The 10 courageous leaders below—who met with Inclusive Security staff in Nairobi last summer—are ensuring that girls are educated, green spaces are protected, violence is stemmed, and communities coexist throughout Kenya. Here’s a glimpse into their incredible work. Known as: An experienced mediator who succeeded in pressuring Kenya’s 2013 presidential candidates to sign a public declaration that they would not participate in, lead, or fund election-related violence.
Impact: Created the Uwiano Platform for Peace, an early warning system that prevented a recurrence of violence during the last two elections. Known as: A benchmark for success. People say a demonstration in Kenya isn’t serious unless Beatrice is there.
Quote: “I’m not a street fighter. I’m a street human rights defender.” Known as: A fierce advocate, defending women against discriminatory inheritance and divorce laws.
Impact: Successfully sued the government for failing to meet a constitutionally-mandated 30% quota for women’s political participation. Known as: The first Maasai woman to run for chief, against 18 men. She lost, despite being the only candidate who was literate.
Quote: “They call me a dangerous woman because I want Maasai girls to be educated.” Known as: A voice of reason and coexistence in one of Kenya’s most volatile regions.
Impact: Established district peace communities across the country—especially in northeast Kenya on the Somali border, where militants from Al-Shabaab attacked Garissa University earlier this year, killing 147. Impact: Organizes football matches with boys and girls from different tribes to encourage cooperative play and community cohesion. Children are taught to “shoot to score, not to kill.”
Quote: “You can’t disarm weapons until you first disarm the mind.” Known as: An environmental activist, helping to protect Kenya’s few green spaces—including a park given to the city of Nairobi by her grandfather.
Impact: Helped make “Ms.” an official title in the country. Known as: “Kenya’s best early warning system.” After a 15-year-old girl was killed outside her home in election-related violence, she mobilized thousands of women to prevent further conflict.
Quote: (on female leaders) “When we’re determined to do something, we do it. Even if there are only two or three of us.” Known as: The first name that comes to mind when a Kenyan is asked who protects human rights in their country.
Impact: Is a strong voice in the push for accountability in Kenya. 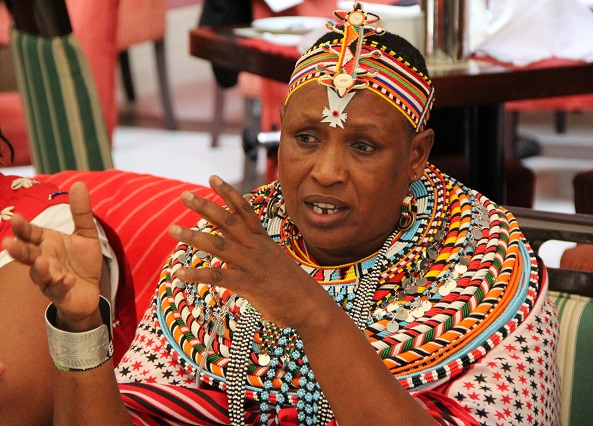 Impact: Created a women-only village for females ostracized by the community or banished by their families.
Quote: “They said ‘women’s village’ as a dirty thing. I said, ‘Let’s be proud of that name.’”

Click here to see a directory of women leaders we work with throughout the globe.